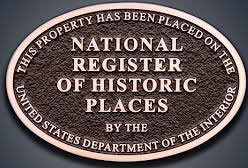 Celebrating 50 years this year, SAU Tech has reached another milestone with three of its buildings being added to historical registries.

Spring of 2017 started with staff from the Arkansas Department of Heritage meeting with SAU Tech's Chancellor and grant writer to discuss the inclusion of some of the former Shumaker Naval base buildings as historical landmarks. After research by the ADH was completed, SAU Tech received word that the former Laundry Building, now used as classrooms and the College's Physical Plant, was eligible for the Arkansas Historical Register and that the Administration Building and former Civilian Barracks Buildings, were in the process of being reviewed for inclusion on the National Register of Historical Places.

As of May 29, 2018, the Administration Building and former Civilian Barracks are both on the National Register of Historical Places.  Dr. Jason Morrison, who led this effort, stated that, " The distinction of adding a part of the community's history to the official federal and state registers is a milestone for the College and community. Not only was the College able to start in the buildings that were once the military ammunition depot, the buildings remain a vital part of the campus today. The defense of this nation has had a long history in this community and continues to be vital to providing jobs and a secure future for the area."

The College will seek funding to improve the buildings while maintaining their historical significance. A celebration of the College's 50th Birthday is scheduled for August 29, 2018 at Noon. The public is invited to attend.

Pictured above is the Shumaker Naval Ammunition Depot Administration Building. Below is the Building today which is still used for the administration of the College.

Pictured above is the Naval Laundry Building which is used today as the manufacturing building and physical plant for the College.
The additional buildings added to the National Registry are the two dorms or what was civilian barracks that are located across the street from the College. One building is partially used to house Arkansas Fire Training Academy students and overflow of students from SAU Tech's housing.