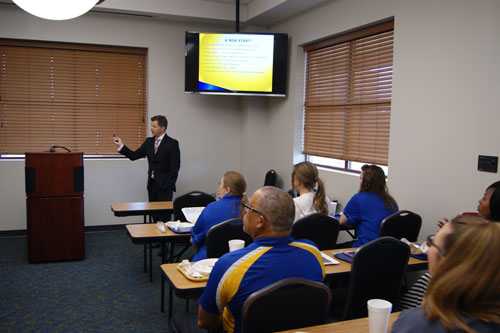 SAU Tech marked the week of September 18 with a public school counselor appreciation event. On Tuesday of that week, area school counselors came on campus to spend the morning with the college’s financial aid staff and had lunch served by the Tech Diner. During lunch, Dr. Morrison, SAU Tech’s Chancellor, spoke about upcoming programs and plans for SAU Tech during which he announced the new Tech Scholars Program scheduled to start in fall 2018.

The Tech Scholars program is a program Morrison created when he came in January of this year. Morrison had this to say about the new endeavor, “The Tech Scholars program provides incoming SAU Tech students an avenue to really make connections and excel academically. The program offers that “something extra” that academically strong students need to build self-confidence and leadership skills. I am excited about this program and have been impressed by the support we are seeing in the community from donors.”

The Tech Scholars Program provides an opportunity for students to participate in a program that promotes peer-to-peer learning outside of the traditional classroom and freedom of expression during teacher to student and student to teacher interactions. Leadership skills are developed through service projects on campus as well as the local community. More information about benefits and eligibility requirements for the program can be found at www.sautech.edu/tech-scholars-program. The program is supported by donations to the SAU Tech Foundation. To learn how you can support a Tech Scholar, contact Lisa Antoon at 870-574-4488 or by email at lantoon@sautech.edu.