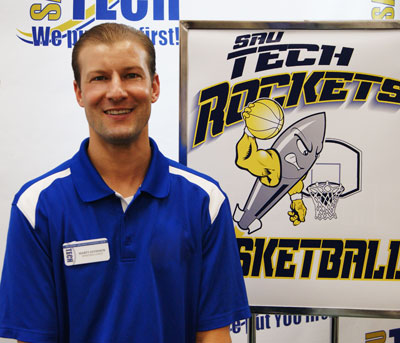 Southern Arkansas University Tech, Camden Arkansas – SAU Tech is pleased to announce the hiring of, Marty Levinson, as the new head basketball coach for the SAU Tech Rockets. Levinson, an avid basketball player, and former high school player played for Bellevue West in Nebraska and helped lead them to a state championship in 2000. As a player in 2003 for the University of Nebraska Kearney, Levinson was part of the team that were NCAA D2 Regional Champions and Elite 8 qualifiers with a 30-3 record. Levinson has experience at all levels of the game, as an assistant coach, head coach, manager and player. His work history covers positions in California and Nebraska at both high schools and colleges. He earned a Masters of Art in Education from the University of Nebraska at Kearney in 2011 and has lived in California since 2014. Levinson coached Tyrone Criswell who was the NJCAA Division 2 Junior College Player of the Year and in 2002, Levinson was the head coach for Central Community College in California which finished with a record of 26-10 and placed 3rd nationally. Levinson also coached at the University of the Pacific which is a NCAA Division 1 college. Levinson is currently working with the South Sudan basketball team to help them qualify for the 2020 Olympics in head to head qualifying match-ups.

When asked what the greatest advantage he sees in coming to SAU Tech to start up competitive basketball teams, Levinson stated that “I get to take my personal vision and implement it from the ground up. It is an amazing opportunity that most coaches never get. I believe that college basketball is a platform for students to obtain an education and expand their life experiences. It’s not just about the game. Winning is great, but seeing students get an education and continue on to successful careers is the best part of it all. The teams I have been on and coached have had success because the participants came together and functioned as a team. It wasn’t about one person; it was everyone doing their part. That is what I will work to accomplish with the SAU Tech Rockets. My biggest challenge here in Camden is that I don’t have community contacts but I am hoping that will soon change. I am already making contact with the local basketball coaches.” Levinson enjoys playing basketball and spending time with his family. He says he is especially proud that he is an uncle as his brother now has a son and daughter.

Dr. Morrison, SAU Tech Chancellor, made this statement with regards to the new athletic endeavor at SAU Tech, “Students at two-year colleges deserve the right to experience the same things four-year college students experience. Basketball is one of the ways that SAU Tech is providing a complete college experience for its students. Athletics can provide students with a foundation in which to obtain a college education and build leadership skills. We are excited about Coach Levinson and the experience and energy he is already bringing to the college.”

Levinson will be spending the fall and spring preparing for the start of Rocket basketball in fall 2018. His offices are located in the SAU Tech Student Center and he can be reached at 870-574-4545. SAU Tech’s Vice Chancellor for Student Services, David McLeane, is serving as the college’s athletic director. McLeane is a former high school coach and mathematics teacher.