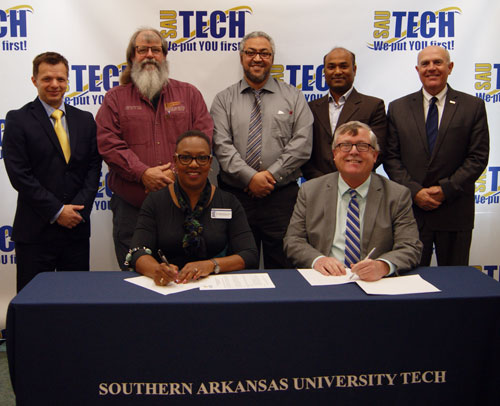 Southern Arkansas University Tech (SAU Tech) and Southern Arkansas University (SAU) brought faculty members and executive officers together on November 10, 2017, at SAU Tech to sign new and revised articulation agreements between the institutions. The articulations included updates to the already existing Engineering Physics and Teacher Education programs and two new articulations- Health, Kinesiology, and Recreation, and Dual Enrollment. The Dual Enrollment articulation provides SAU Tech students, who are planning to pursue a bachelor degree, with a more fluid transition from SAU Tech to SAU.  This agreement will also help students see the bigger picture and keep them on the right track with their degree plan.  Additional benefits for SAU Tech students include access to SAU’s advising center, career services, library, and facilities.  This agreement helps students, who are apprehensive about attending a four-year institution, to start their degree at SAU Tech and obtain the support and access they need to transfer to SAU.

Dr. Trey Berry, SAU System President, was on hand for the signing and stated that “We are excited to create more pathways between SAU Tech and SAU to help our students succeed and achieve their goals of obtaining an education. The new agreements allow for a smooth transfer of credit for students pursuing bachelor degrees, and enhanced services for students at SAU Tech through the Dual Enrollment articulation. The partnership between SAU and SAU Tech has never been stronger.”

Since coming to SAU Tech in January 2017, Dr. Jason Morrision has led the efforts to increase the agreements between the two colleges to benefit both SAU and SAU Tech students. Morrison stated that “We are part of the same educational system and we want our students to benefit from this by making the transition between our degree programs more streamlined. This helps our students and ensures that we are increasing the number of Arkansas residents who obtain bachelor degrees”

SAU Tech became part of the Southern Arkansas University System in 1975 and during this time the colleges have worked to ensure that students from both institutions benefit from the relationship the colleges share. For more information about SAU Tech and SAU articulations agreements go to www.sautech.edu/university-transfer-agreements.