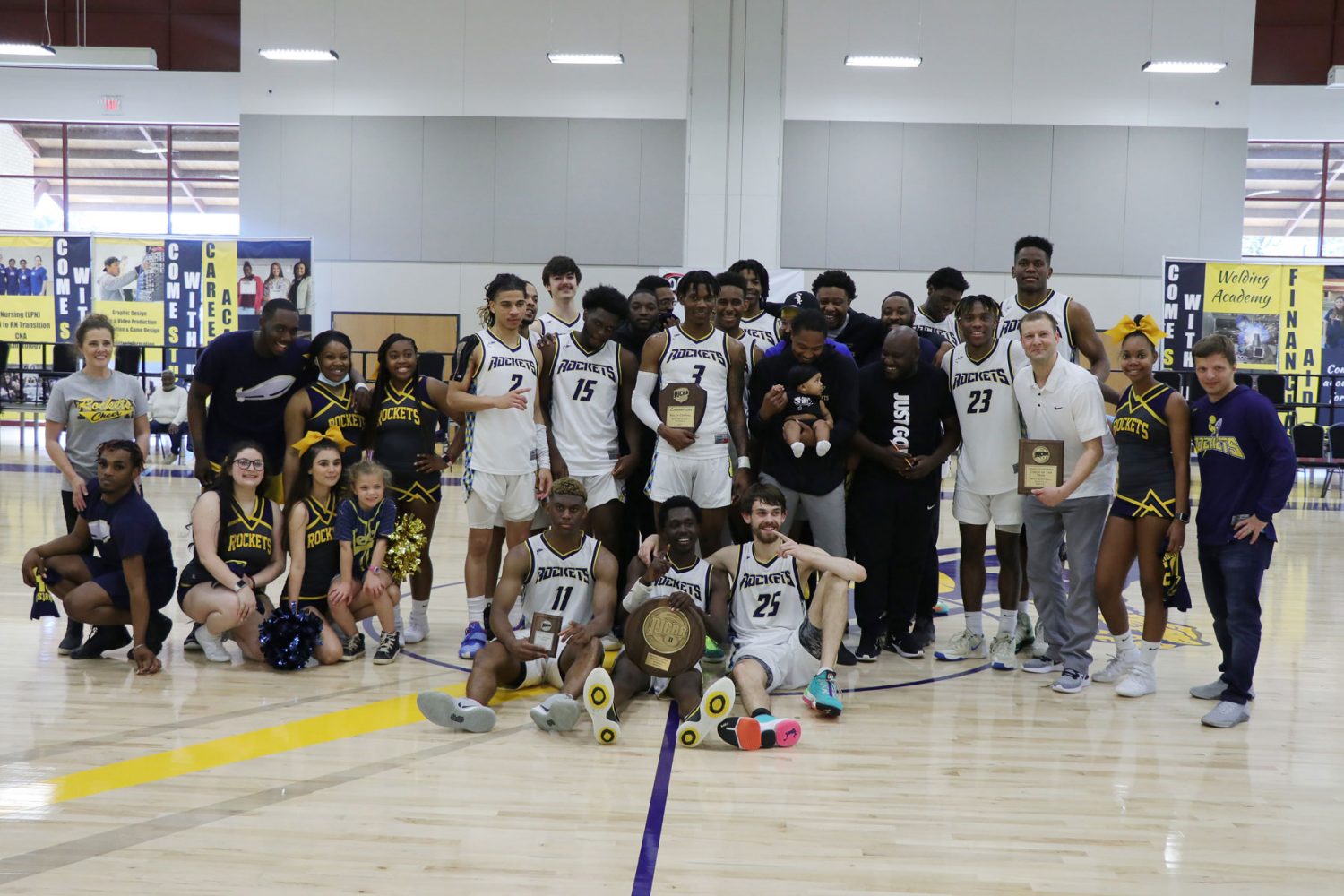 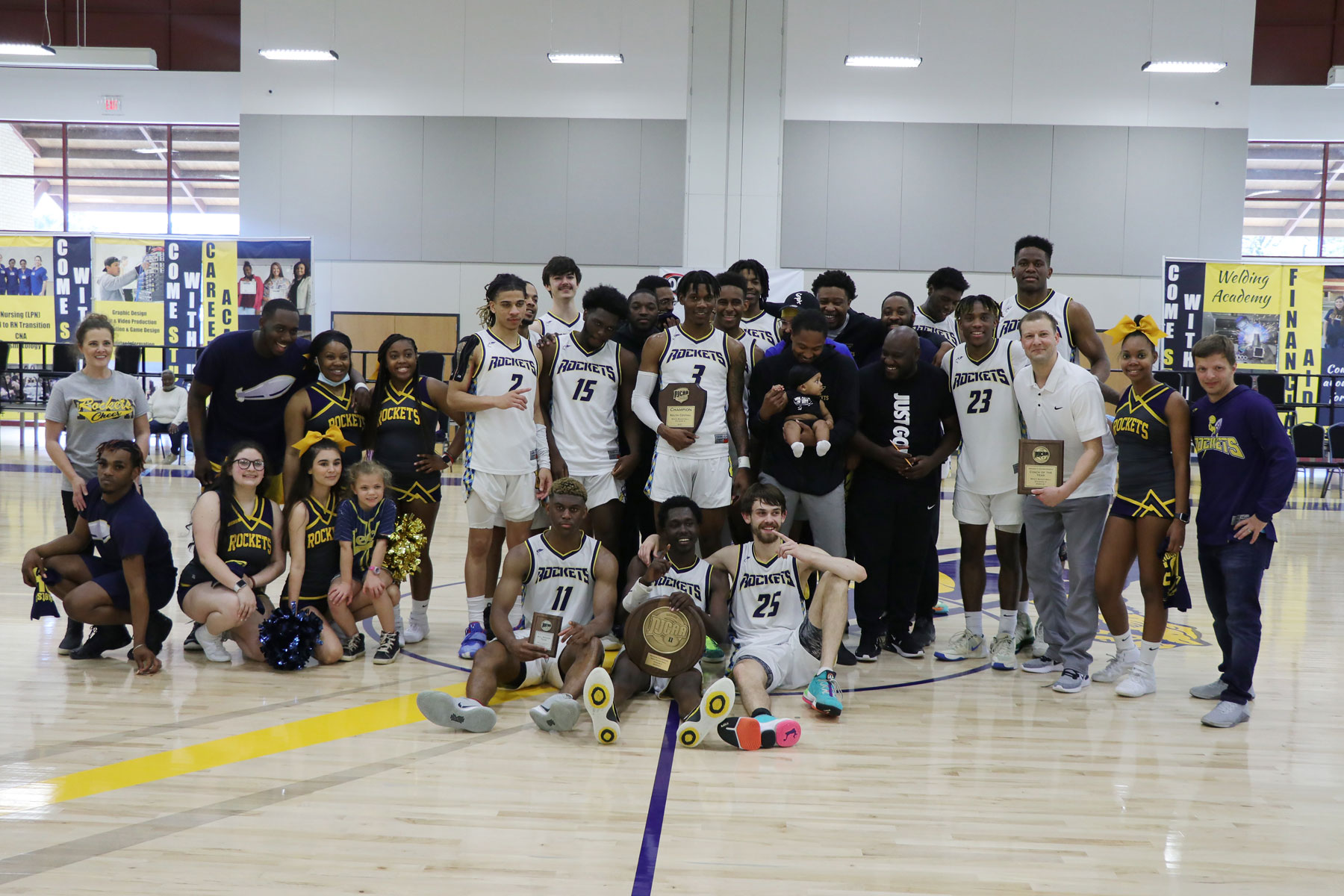 The Rockets trailed by as many as 13 points in the first half against the Arkansas State MidSouth Greyhounds before storming back to win 82-66 on Saturday. Now the Rockets will get to compete on the national level when they play in the NJCAA Division II Tournament in Danville, Illinois at Mary Miller Center from April 20-24. Their opponent is yet to be determined.

SAU Tech’s comeback was initiated by Cam Akins and Allen Taylor who combined for 27 points in the second half. Each finished with 19 points each.

The Rockets got off to a hot start going up 12-2 against the Greyhounds before getting out of sync. What seemed like immediately, the home team was trailing 31-18. The Greyhounds showed its championship pedigree by swinging the ball around for uncontested threes and out-hustling to Rockets to 50-50 balls - something a lot of teams haven’t been able to do against the Rockets. Back-to-back three-point shots by Akins and Donovan Vickers created a brief run before the half but the Rockets were still down, 40-31.

A different Rocket team came out in the second half and it was evident as they cut the Greyhound lead to a single bucket and forced a timeout with 16 minutes left in the ball game. SAU Tech got back to fighting for loose balls, rebounding, and playing disciplined defense. Ronnie Stapp hit a couple of free throws before Taylor added a couple of his own on the next offensive possession. Taylor would score from the inside on the next trip down the floor and Akins would sink a three that touched every spot on the cylinder before falling home.

After the time out, the Rockets were able to speed up the game and finally take the lead when Stapp found Makeem Loudermill for a bucket to make it 51-50. Taylor would grab a defensive rebound, drive down the floor and attempt a layup before Loudermill grabbed the rebound and scored. The Rockets wouldn’t look back after Kon Chol nailed a three-pointer to make it 56-50 with 10 minutes left. Treyon Jackson - who was in foul trouble in the first half - made his presence felt in the paint on the defensive end coming up with three blocks and altering a lot of shots to help the Rockets extend their lead.

SAU Tech Rockets Coach Marty Levinson was able to empty his bench in the final moments of the game as the team embraced each other after the final buzzer. In a show of sportsmanship, Greyhounds Head Coach Chris Parker presented Levinson with the Championship plaque.

SAU Tech was represented well among the region’s post-season award winners. Levinson was named the Region’s Coach of the Year. SAU Tech sophomore Treyon Johnson and freshman Allen Taylor made the first team while freshman Donovan Vickers was announced to the second team. The same can be said about the SAU Tech Lady Rockets who went on a strong run during the regional tournament and finished as runner-ups for the second year in a row. This was Coach Aramie Brooks second time leading the Rockets to the top of the conference since taking over a winless Lady Rockets team in 2020. Freshman point guard Alexandria Allie Johnson was named the Region 2 MVP on the All-Region Team while Jordan Shelton and Peyton Peoples were named to the All-Region Second Team.

The SAU Tech Rockets will make their first appearance in school history in the NJCAA Division II National Basketball Tournament against the Ancilla Chargers. Ancilla College is located near Plymouth, Indiana, and was ranked No. 1 in Division 2 before being upset in the semi-finals of the Great Lakes Regional Tournament. The loss was their only one on the season as they are the only Division II team averaging over 100 points per game. The game will be at 1 p.m. on April 21.

More on the Rocket's historic moment will be in Wednesday edition including the All-Region Team members for the Rockets and Lady Rockets, and the Rockets opponents in the first round of the tournament.