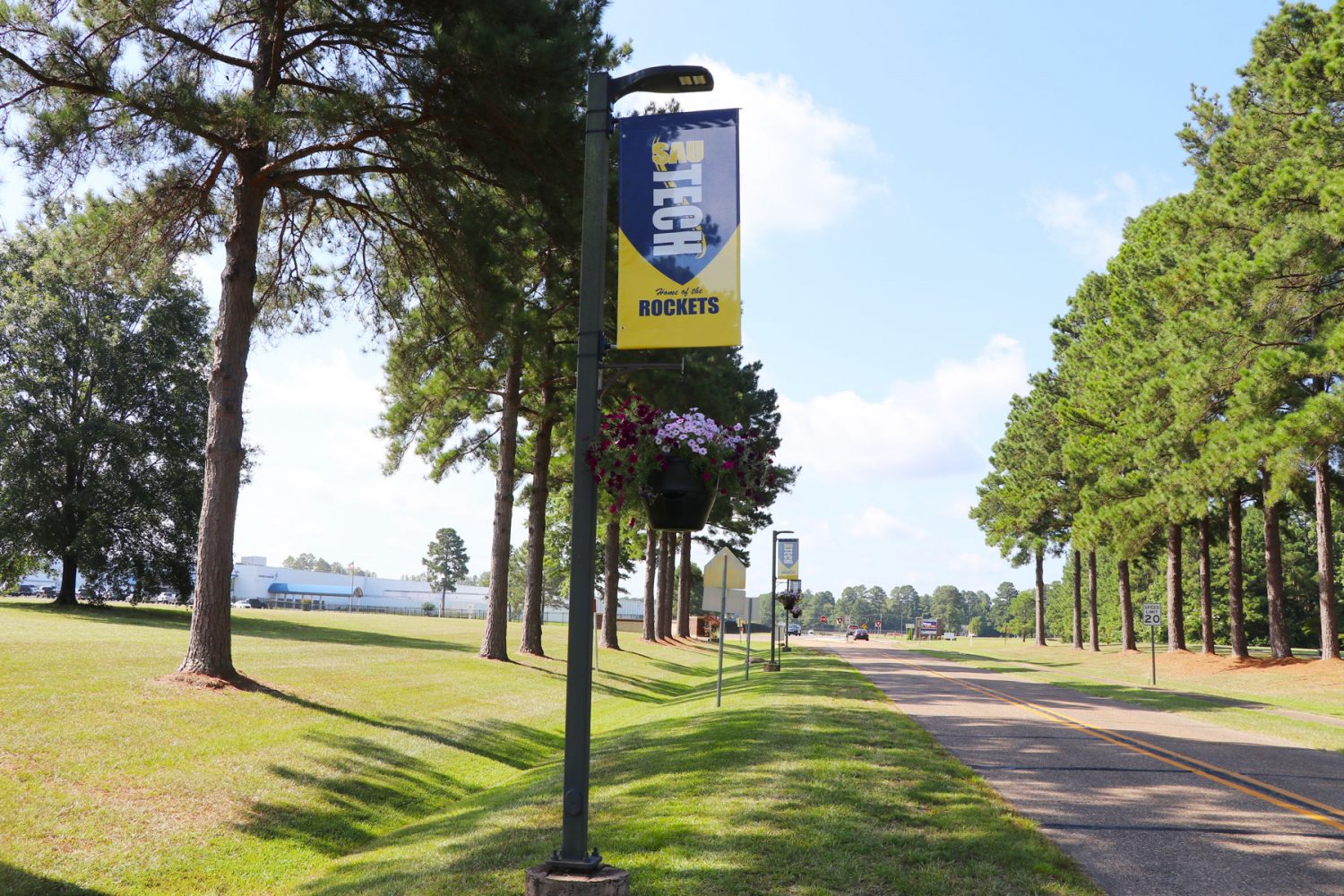 Can five years make much difference in the landscape of a business or, in this case, of a college? The evidence is overwhelming that drastic change can happen with exemplary leadership that empowers staff and students to do their best.

In the fall of 2016, a young man came to the SAU Tech campus to speak to the faculty and staff as a finalist for the position of the College’s chancellor. Dr. Jason Morrison resonated with his audience as the father of a young daughter with a background in higher education academics. His enthusiasm and energy radiated above and beyond the other applicants as he ended his speech with “Be Great” “Be Tech.” When reflecting on his impression of the College after his first visit, he shared that he saw enormous potential in the staff and faculty and the position of the College inside the Highland Industrial Park. He noted that he saw people ready and willing to work hard to make positive changes for the future and that a tremendous amount of dedication would be required on his part to make it happen.

SAU Tech’s employees would soon learn that Dr. Jason Morrison had a vision and plans that would require a commitment of time and hard work for both himself and the employees. Dr. Jason L. Morrison was hired to begin his role as the Chancellor of SAU Tech in January 2017. Before arriving on campus, he worked with the communications staff to ensure employees received a “Be Great” “Be Tech” t-shirt at spring convocation as a gift from him and his wife. It wasn’t long before little Brennan Morrison and Stephanie were part of the campus scene. Morrison believes in family, and he demonstrated that from the beginning with the inclusion of his wife and daughter in the day-to-day activities of the College. Brennan is a regular participant on the Rocket Cheer Squad that Stephanie coaches and is now in fourth grade at Camden Fairview. Stephanie also teaches criminal justice and works relentlessly to help SAU Tech students.

Dedication has been the theme of Morrison’s administration with his commitment, including working all hours of the day and night and joining in on any jobs requiring physical labor. He believes that “sweat equity” is the key to everything. Being ready to do “whatever it takes” to get the job done is what Morrison expects of himself and his staff. He encourages his executive staff to exhibit an “all hands on deck” style of leadership that fosters community and a family-like working environment.

To build a more vital staff, Dr. Morrison changed critical staff positions moving people to utilize their natural talents, skills, and experience. “The campus has a smaller but more dedicated staff now, and we operate as more of a family helping each other with projects across departments,” noted Kimberly Coker, SAU Tech’s Dean for Communications and Public Relations. “The culture is now student-first from the chancellor down, and it has transformed everything. Dr. Morrison is the brand champion for SAU Tech, and in all the 19 years I have worked here, it’s the first time the chancellor is the leader of the SAU Tech brand. It makes such a difference for marketing and fundraising. I am in the best years of my career at SAU Tech right now with a leader with an unmatched enthusiasm for marketing efforts and ideas to grow enrollment and financial support.” Dr. Morrison has a radio show on KCAC 89.5 where each week, he focuses on promoting programs, faculty, students, and supporters of the College. He is relentless in sharing the story of SAU Tech and advocating for students.

Dr. Trey Berry, President of the SAU System, had this to say about Dr. Morrison, “Dr. Morrison’s vision and energy have helped completely transform SAU Tech these past five years. His energy is contagious and is reflected in the new excitement among students on campus, the competitive nature of the new athletic teams, increased strength and growth of the Fire Training Academy, and a vibrant student campus living within the new residence halls that have been built. His rebranding efforts for the campus have been extremely effective and creative. I know that his vision, care, and energy will continue to transform lives at SAU Tech!”

Morrison’s vision to reinstate NJCAA basketball with men’s and women’s teams was met with enthusiasm from the campus and the community. The community voted to change the College’s mascot to a rocket to represent better the industries in the Highland Industrial Park. Donations and in-kind services were the foundation Morrison used to get the funding needed to kick start his vision. Dr. Morrison worked with the SAU Tech Foundation to build additional student housing, raise donations for the gym conversion, and transportation for the athletic teams. He worked with student life to enhance the college experience for students with the expansion of activities and services offered to students to encourage enrollment growth.

NJCAA men’s and women’s basketball began in fall 2018 at the Shaddock Fieldhouse in Camden. By the fall of 2019, the teams played on the College’s campus in the Student Center, where meeting spaces were converted to a gym. By fall of 2019, Dr. Morrision added NJCAA softball to the athletic line-up, and volunteer work and in-kind support provided the way for a Rocket Softball field to be ready for play by January 2020. Season play started out strong but was soon cut short with the start of the COVID-19 pandemic.

Dr. Morrison responded to the pandemic by creating a COVID-19 task force comprised of his executive officers, the College’s emergency response team members, and other key staff members. He approached the situation with one focus in mind-how to keep the students and staff safe while still providing education to students. Every decision hinged on that idea, and SAU Tech has remained strong and viable during the pandemic. Due to CARES Act funds, SAU Tech has been able to help students with living and education expenses, and through CARES Act competitive grants, the College has funds to upgrade technology to provide classrooms with streaming technology. The improvement in wifi and campus technology will help ensure that students can always access the learning environment.

In January 2021, Dr. Edward Rice became the College’s new vice chancellor for student services. Dr. Rice is energetic and is supportive of the vision Dr. Morrison has for the College. Rice says that “I immediately recognized the drive and dedication of Dr. Morrison and knew that this is the place I wanted to work. He tackles every opportunity and obstacle at break-neck speed and doesn’t look back. It is the kind of environment that I want to be a part of, and I am looking forward to what the future holds.”

The changes were not only made in student life; significant changes took place in academics. Dr. Valerie Wilson became the Vice Chancellor for Academics and Planning and began reviewing the College’s programs for viability and improvement. Programs that were underproducing graduates were reviewed for viability, and some were replaced or revamped to meet student and employer needs. Dr. Morrison focused on adding programs in areas in high demand, such as additional allied health programs, nondestructive testing, and cybersecurity. Morrison hired additional faculty to serve transfer programs. Some technical programs were streamlined according to student completion outcomes to improve the College’s overall performance under the state’s higher education funding formula.

In 2020, the College earned reaccreditation under the Higher Learning Commission(HLC). Dr. Morrison’s experience as a peer reviewer with HLC helped SAU Tech successfully navigate HLC’s review in spring 2020. Dr. Morrison worked closely with Dr. Valerie Wilson and provided leadership during the HLC campus visit. Dr. Valerie Wilson weighed in on the last five years, saying, “The previous five years under the leadership of Dr. Morrison have been a whirlwind of change and excitement! He had a vision for the College when he arrived and has taken steps to bring that vision to fruition. SAU Tech is in a much better place today than we were five years ago. I attribute that success to Dr. Morrison’s commitment and passion for the College.

SAU Tech’s Vice Chancellor for Finance and Administration, Gaye Manning, said, “If I had only two words to describe Chancellor Jason Morrison, those two words would be “Change Agent”. The past five years, under Dr. Morrison’s leadership, have been fast and furious. The College has made several strategic investments in academics, athletics, infrastructure, and student services. Today SAU Tech, the Arkansas Fire Training Academy, and the Arkansas Environmental Academy are much stronger institutions because of his leadership and vision.”

The generosity of the Camden, Hampton, Bearden, and Fordyce communities in their support of the Tech Scholars program, softball, basketball, softball, cheer, and soon, baseball is tremendous. The communities stepped up and sponsored teams, provided in-kind and cash donations, meals, supplies, and more to make Dr. Morrison’s vision a reality. A vision that started as “Be Great” “Be Tech” exploded to include a full line-up of NJCAA college athletics, cheer, scholars, additional student housing, historical building renovations, new academic programs, new faculty, and a bright future for SAU Tech and the students and communities it serves. SAU Tech is the very definition of progress, and we can all be proud of our hometown community college.